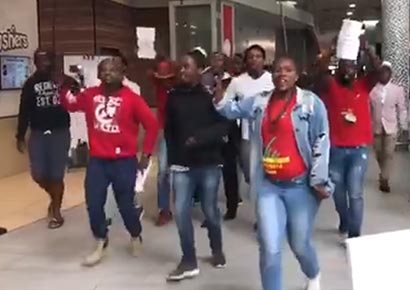 The executive producer of Inxeba has responded to the unprecedented protests that have led to cancellations of the film’s screenings around the country.

News of the demonstrations and threats of violence first emerged from Port Elizabeth, where Herald Live reported that 30 to 50 people protested outside the Walmer Park shopping centre cinema.

The venue initially delayed its morning screenings but then later announced that it will no longer show the film at all. A sign in the cinema stated: “This letter serves as a notice the the movie Inxeba ‘The Wound’ has been suspended and will not be shown at Nu Metro Walmer Park.”

Screenings have also been postponed or canceled at the Baywest Mall in Port Elizabeth and Hemingways Mall in East London.

Johannesburg was next. In a post on Facebook, with the hashtag “INXEBAMUSTFALL”, the Man And Boy Foundation (MBF) said it had “closed” the Bioscope cinema in the city’s Maboneng district. The organisation is a national NGO that is aimed at “promoting safe traditional initiation practice”.

Mambaonline spoke to Bioscope owner Russel Grant who confirmed that protesters had been at the cinema earlier in the day and had threatened to return for the sold out 6pm and 8pm screenings.

“We made the call as the cinema to postpone tonight’s screenings,” he said. “We have sent emails to our ticket buyers. For us it’s purely a safety thing until we have a better idea of the nature of this.”

It’s now emerged that Nu Metro Canal Walk in Cape Town has cancelled its screenings of Inxeba. The cinema tweeted: “In the interests of the safety of our customers and staff, following threats of violence and damage to property, Nu Metro Canal Walk will not be screening #Inxeba (‘The Wound’).” There are also reports that death threats have been made to staff at V&A Nouveau at the Waterfront.

The protests and intimidation follow calls by the MBF and Congress of Traditional Leaders of South Africa (Contralesa) for the film to be banned. The groups say they are not motivated by homophobia but are angered because the film depicts sacred aspects of traditional isiXhosa initiation ceremonies.

The MBF staged a sit in at the Centurion offices of the Film and Publication Board on Wednesday and railed against the “disrespect and distortions that are in the movie”.

Vundla explained that the producers’ primary concern is the safety of cinema goers and that screenings of the films will still go ahead but on a cinema-to-cinema basis.

While he acknowledged that initiation ceremonies are “very sensitive” he insisted that the film does not reveal “any secrets”. He also rejected claims by traditional leaders that their opposition was not based on homophobia. 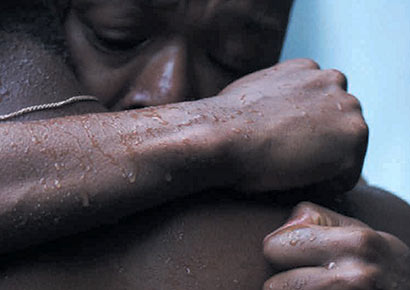 “That’s absolute nonsense,” Vundla said, arguing that their real objection is “the idea of men within their sacred context having same-sex love. That’s the crux of what this is about.”

He continued: “As gay African men, we have every right to reflect and depict new ideas of black male masculinity and queer love within a traditional context.

“On the ground, gay black men in general do have a daily struggle, where they can’t be themselves, where their lives are threatened. And we have every right to express that experience,” Vundla said.

Inxeba is the story of Xolani, a lonely closeted factory worker who joins the men of his community in the mountains of the Eastern Cape to initiate a group of teenage boys into manhood. There, he faces the man he secretly loves.

A small group of people celebrate at #BaywestMall after it was announced that the controversial movie #Inxeba (#TheWound) has been suspended at Ster-Kinekor Baywest. https://t.co/OirSM6OISr pic.twitter.com/F5dayhdl5d

In the interests of the safety of our customers and staff, following threats of violence and damage to property, Nu Metro Canal Walk will not be screening #Inxeba (‘The Wound’). For any further information, please reach us at helpdesk@numetro.co.za or on 0861-CINEMA.

Send this to a friend